In recent posts I demonstrated how Act 1 of the 3 Act structure works for major films like Misery and Apocalypse Now.

I’m getting a great response to these posts so I thought I would do it again for one of my favourite horror films “Ring”.

But first, some background.

Story Architecture is my technique to analyse, understand and write the 3 Act Structure.

It’s an Act By Act breakdown of the 45 elements your screenplay needs to fulfil the 3 Act Structure, be engaging, surprising, build coherently and express the complexity of your story and characters.

However it isn’t a strict formula, you don’t have to include all of the elements, some scenes may have multiple elements in them and they don’t have to appear in this order.

Here is the horror film “Ring” broken down into the first 15 elements of Act 1.

Act 2 and 3 are available in my 1 Step-A-Day training program. For more information please visit my membership page.

Based on novel Ring by Koji Suzuki.

US Adaptation by Ehren Kruger.

‘Ring’  is one of my all time favourite films, I watch it at least once every year and it has been hugely influential on my ghost horror screenplay ‘The Surrogate’ which is going into production early next year.

The Japanese ‘Ring’  was released in 1998 and became a cultural sensation terrifying audiences around the world and heralded the J Horror phenomenon which produced such classics as ‘The Grudge’, ‘Dark Water’ and ‘Audition’.

In 2002 an American remake of ‘Ring’ hit the big screen, it mostly stayed faithful to the original film, with only a few changes around locations, characters and fleshing out some of the ambiguous story elements.

‘Ring’  is arguably the best paranormal horror film made in the last 20 years. The unconventional story telling, genre bending twist at the climax and striking visuals have influenced and shaped modern horror cinema. Like many horror films both versions were hugely successful at the box office.

Logline
A reporter and her ex-husband investigate a cursed video tape that is rumoured to kill the viewer seven days after watching it.

Opening image of the protagonist and what their current world and situation is.

Japanse Version
We first meet Reiko working as a journalist and interviewing high school girls in a cafe. She’s young, well dressed and professional in appearance and attitude. She has a curious nature which will get her into trouble in the story…as the saying goes ‘curiosity killed the cat’.

American Remake
Rachel’s introduction in the remake is different, we first see her rushing into her sons classroom flustered. She feels guilty for running late to pick him up and apologises. Her son’s teacher shows her disturbing images of death he has drawn in class. Rachel explains his cousin died a few days earlier. The teacher is chilled because he drew the pictures over a week ago.

To become emotionally invested in the story the audience needs to empathize with the protagonist.

Tricks to create empathy are: Misfortune, Power, They Are the Best, Humour, Other Characters Admire Them, Powerful.

Ring
Japanese Version and American Remake
Reiko/Rachel is an absent mother but to soften that negative trait she feels guilty about it.

In early scenes we see her doing her job and she’s clearly good at it. She intelligent and has good investigative skills. When she hears about the cursed tape her mind starts ticking and she needs to find answers.

When she attends the funeral wake of her niece she is respectful, compassionate and supportive.

Set the tone your story with some scenes that fulfil the experience the audience is expecting from the genre your story is.

If your screenplay is a Comedy – have some laughs, a Thriller – have a race against time or risky situation, an Action – have a chase or fight , a Horror – home some scares, a death or a haunting.

The opening scene is a masterpiece of screenwriting and sets the tone perfectly. It goes for 6 pages and contains all the elements expected in a horror film: intrigue, fear, death and sexuality.

It opens with two high school girls talking in their room about boys and the discussion shifts to an urban myth about a cursed video tape that if you watch it you die 7 days later. One of the girls confesses she watched it with her boyfriend and friends a. week earlier. The scene climaxes with her being attacked by a mysterious and unseen spectre.

Is the story about Justice, Survival, Love, The American Dream.

Is the theme a question to be explored – Can men and women be friends?

Like all horror screenplays Ring deals with the themes of survival, death, good and evil.

Beyond these universal themes Ring explores motherhood and the destruction of the family unit.

Rieko/Rachel is an absent mother who prioritises work over her young son who is essentially raising himself. This is dramatised through her forgetting to pick him up from school, him laying out her clothes for the funeral wake and preparing meals for himself. As the story progresses Reiko/Rachel must become a better mother to save her son.

The destruction of the family unit is also expressed through Reiko/Rachel being separated from the father of her child. In Act 1 it is unclear if he even knows who his father is. As the mystery of the origin of the cursed tape unravels in Act 2 Reiko/Rachel discovers a family beset by infidelity, disfunction and murder.

Show some of the specific skills or abilities the protagonist has that they’ll need later in the story.

The protagonist of a ghost horror is a lay detective character who needs to solve a mystery to save themselves. Reiko/Rachel is an investigative journalist so she already uses these skills professionally. When she hears about the cursed video tape she immediately starts to track down clues, interpret information and piece together facts to solve the mystery and find the truth.

Opening image of them and what they are doing.

The antagonist is Sadako/Samara. She appears in two scenes in Act 1. In the opening sequence she kills one of the school girls but is unseen which creates intrigue and mystery.

When Reiko/Rachel watches the cursed video tape she doesn’t realise it but Sadako/Samara’s spirit and back story is embedded in it.

The event that throws the protagonists world out of balance which sets up the goal of the story they strive to achieve. From the inciting incident emerges the Dramatic Question which must be answered by the end of the story.

This is combined with the Introduce Protagonist Scene.

In the second scene of the screenplay Reiko interviews high school girls for a news story. One of them mentions a cursed video tape and after you watch it the phone rings and a woman says “you’ll die in 7 days”.

A few scenes later Reiko and her son attend the wake of her nieces death. There she discovers her niece and three friends watched the cursed video tape and now three are dead and one is in a psychiatric hospital.

The Dramatic Question is
Will Reiko/Rahcel find out if the myth of the cursed tape is real?

American Remake
The inciting incident occurs later in Act 1 and is at Rachel’s nieces wake. This is the first time she hears about the cursed tape whilst talking with her nieces friends. The scene plays the same as the Japanese version but it’s all new information to Rachel, where as for Reiko it confirms what she had heard earlier.

If the protagonist chooses, is forced to engage or react to the inciting incident, what is the First Step they take to achieve their goal or solve their problem?

Reiko/Rachel investigates the deaths of her niece and her friends and through newspaper articles and police footage. She discovers the deaths are unexplained and their corpses were found with grotesquely strange expressions on their faces. She gets her nieces photo’s developed and they show the cabin the friends stayed at and disturbingly their faces are distorted in some photos. She deduces the teens watched the video at a cabin and drives there to find out more information.

If the protagonist doesn’t react or refuse to engage how and why do they do this?

The Ring
Japanese Version and American Remake
There is no avoidance as Reiko/Rachel commits to the goal straight away.

Introduce some of the supporting characters, though not all have to be introduced in Act 1.

Reiko’s son is pivotal in the story and his involvement in upping the stakes in Act 2 is crucial. He is introduced when Reiko rushes in from work and running late for her nieces funeral wake. We see he has adult responsibilities in the house and is already dressed in his Sunday best and has laid his mothers clothes out too.

He then asks about why his cousin had to die and if young children die. This serves three functions, despite his adult responsibilities he is an innocent child, it plays into the audiences childhood fear of death and introduces death as a theme.

Reiko’s father is introduced briefly at the funeral wake. He comes back into the story in Act 2 for two brief scenes but is crucial in the climax of the story in Reiko solving her problem and achieving her goal.

Rachel’s son is the only support character introduced in Act 1. This scene is combined with Introduce Protagonist.

Neither version has subplots.

What is the first set back the protagonist encounters in striving to achieve their goal?

The first set back is combined with the Act 1 Climax.

Show any specific elements for the climax to work. This is also referred to as Set Up/Pay Off and will occur throughout a well structured screenplay.

Reiko/Rachel and the audience aren’t aware that all the information to solve the mystery is imbedded in the video. However, initially it’s so cryptic we don’t know what the imagery means. It’s very effective in making us simultaneously feeling worried, dread and intrigued

What is part of the protagonist’s back story?

There is no backstory in Act 1, it commences early in Act 2.

A point of no return, committing to the goal, a major set back, a major development, a revelation, a transition to new world – is it positive or negative event?

Reiko/Rachel finds the cursed video tape at the cabin and watches it. When it finishes, as the legend says, the phone rings and a voice tells tells her “she will die in 7 days”.

The Dramatic Question escalates to

Will Reiko/Rachel survive by finding the origins of the cursed video tape and unlock the mystery?

The Act 1 Climax is a negative development. 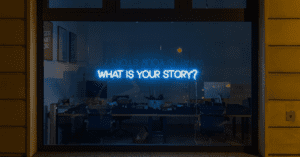 Length Matters – What I learnt From Making The Surrogate #1